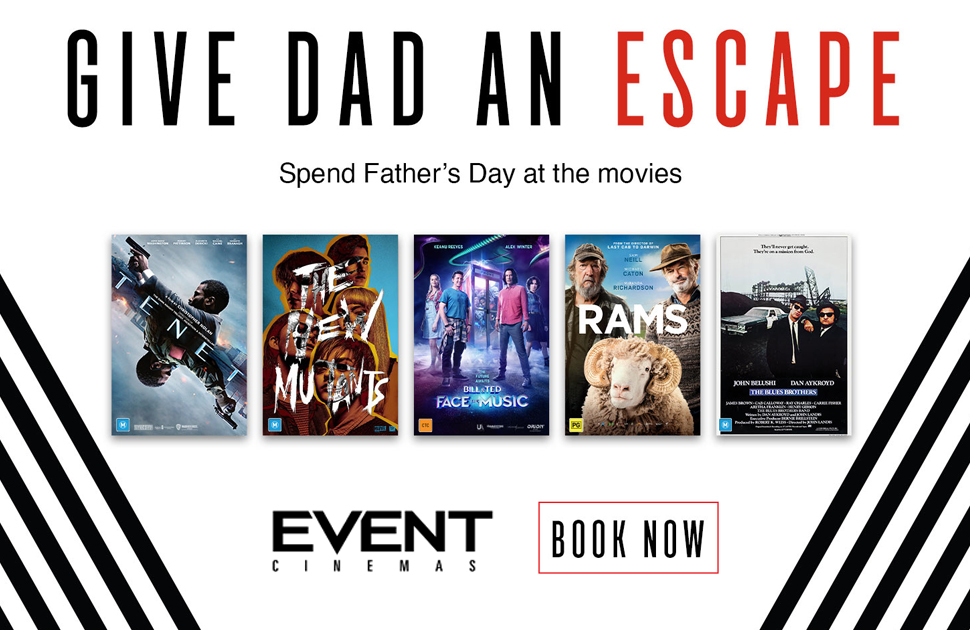 With Father’s Day fast approaching, Event Cinemas have plenty of ideas to help make Dad’s day including a line-up of great films and advance screenings, a special $10* Gold Class dessert deal and themed gift cards.
There has never been a better time to spoil Dad with a day out at the movies, with a fantastic range of films on offer, there’s sure to be something just right for Dad.

Tenet – Christopher Nolan’s much anticipated mind-bending sci-fi thriller is here. Armed with only one word, Tenet, and fighting for the survival of the entire world, the protagonist (John David Washington), journeys through a twilight world of international espionage on a mission that will unfold in something beyond real time.

RAMS (advance screening 6 September) – In remote Western Australia two estranged brothers, Colin (Sam Neill) and Les (Michael Caton), are at war. Raising separate flocks of sheep the two men work side by side, yet are worlds apart. When Les’ prize ram is diagnosed with a rare and lethal illness, authorities order a purge of every sheep in the valley.

Bill and Ted: Face the Music (advance screening 6 September) - The stakes are higher than ever for the time-traveling exploits of Bill and Ted. Yet to fulfil their rock and roll destiny, the now middle-aged best friends set out on a new adventure when a visitor from the future warns them that only their song can save life as we know it.

New Mutants - In this terrifying, action-fuelled film based on the Marvel comic series, five young people who demonstrate special powers are brought to a secret institution to undergo treatments they are told will cure them of the dangers of their powers. Discovering their abilities while held in the secret facility against their will, they fight to escape their past sins and save themselves.

Retro: The Blues Brothers - It's the 40th anniversary of one of the craziest musicals of all time. After his release from prison, Jake (John Belushi) reunites with his brother, Elwood (Dan Aykroyd) and they set about saving the orphanage they grew up in from closing. The two are convinced they can earn the money needed by getting their old band back together. However, after playing several gigs and making a few enemies, including the police, the brothers face daunting odds to deliver the money on time. Original Tickets to this special screening on Father’s Day are $10*.

Sweeten the experience with a Father’s Day Gold Class $10* Dessert Deal with a choice from an indulgent menu featuring:

Alternatively, say I love you with the gift of entertainment and give him a specially designed Father’s Day Gift Card with several fun themes to choose from and value options from $25-$200.
Visit www.eventcinemas.com.au for local screening times.